Primeval, created by Impossible Pictures as the successor to the short lived (and very awesome) Prehistoric Park, is a British science fiction television programme produced for ITV by Impossible Pictures. Created by Adrian Hodges and Tim Haines, who previously created the Walking with… documentary series, Primeval follows a team of scientists tasked with investigating the appearance of temporal anomalies across Great Britain through which prehistoric and futuristic creatures enter the present.

Episode 1: Episode 1 begins with a creepy tone. A shopping trolley rolls along a path in front of a shopping centre and eerie music begins. A growling comes from amongst the trees and a large, very hungry Gorgonopsid emerges from the woods as a woman sprints across the car-park opposite.

This woman (played by Juliet Aubrey, who is absolutely perfect for this role!) is Helen Cutter. It seems that she is either 1) running from the Gorgonopsid, who I will call Fluffy, 2) trying to find something or 3) both of the former. It’s definitely 3. She leaps into an old oil drum which is, apparently, just left in the carpark of a shop. Convenient…

Eventually, after Fluffy discovers she is there, she runs to the shop, bangs on the door, begs to be let in, and then runs for her life into the forest, while Fluffy causes untold mayhem of the car park before roaring angrily.

Eight years later, her husband, Nick Cutter (played by the awesome Douglas Henshall) and his lab assistant Stephen Hart (played by James Murray) arrive at the University where Nick – and Helen, before she ran off – teach.

As they walk towards the University, we are introduced to the shows resident Butt Monkey and all round super nerd, Connor Temple, whom Cutter initially thinks is looking for archeology because of his silly name.

Connor, immediatly puts his foot in it within the first five minutes of being introduced by mentioning Cutter’s wife, Helen, whom, it turns out, is dead… apparently…

Meanwhile, we’re introduced to the next of the main cast, Abby Maitland (played by Hannah Spearitt of SClub7 fame), who is being fired from her job. Naturally, she’s not happy and sets off to find a creature that someone wants the zoos to take.

Back with Connor, Nick and Stephen, we find a very broken fence and learn what happened to Helen… she’s NOT actually dead, or at least, as far as we know. Apparently, she just went missing after investigating a creature sighting eight years prior… Hmm? Creature sighting? Eight years ago? Me thinks she may have been eaten by Fluffy!

Nick, after the mention of his wife has gone into grumpy mode. He’s sitting at a pub when a woman, Claudia (played by the awesome Lucy Brown) snogs him; millions of fans cheer loudly and thousands of fanfiction was born.

She and he are both there for the same reason; the creature sighting. Claudia has a picture… which looks suspiciously like Fluffy! Cutter flirts (badly) with her, and she joins the search.

Outside, Connor is in full geek mode and is bragging to Stephen about the dino-database he’s created.

Meanwhile, Abby is lost and the lizard – which is actually called Rex, and can fly – escapes from her. Ben, who has abandoned Abby, looks through a flashing thing in mid air and sees the Cretaceous period on the otherside – there are lots of Rex’s too! He runs off, pricking his finger.

Abby, how having caught Rex, finds herself in major trouble; Fluffy is back; it’s a shame that Abby and Rex are RIGHT BY THE WATERHOLE! RUN, WOMAN! RUNNNNNN!

Stephen, Nick, Claudia and Connor stumble across the cow that Abby saw earlier. Connor’s compass goes crazy. Ok… Fluffy, a prehistoric world, a flying lizard and a dead cow? Something is DEFINITELY going on!

Fluffy has followed Ben home, and, in spectacular style, viciously smashes his bedroom to smithereens. Ben, naturally, gets in trouble as Fluffy leaves as she is unable to get to him. 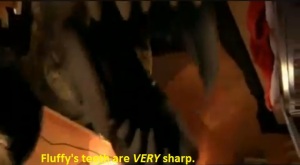 Back in the forest, Abby, still tracking Rex, comes across a Scutosaurus, who I will be calling Brian. Nick tells her not to move; he and the others have arrived. Nick describes Brian as a tortoise and when Abby questions this, Brian is NOT happy, giving an angry roar. Oh… they also discover Rex too.

Back at Ben’s house, Claudia is having a fight with her superiors and learns a valuable lesson: never bring your boss into things, as you’ll get nowhere.

Ah… what would the series do without Ben Miller? Within three minutes of being introduced he gives the line “So much for thinking outside the bloody box.” and all the fans howl with laughter.

While Stephen and Connor attempt to track Fluffy, back at the Home Office, Nick has to deal with Lester’s sheer idiocy. As Rex flies out of the room in which he is being experimented on, Nick gets a silent laugh at Lester’s expense as Abby and Claudia chase Rex through the building – with Rex having a little dance to music in the lift – and to a window. He flies out of it, then swoops back into Abby’s arms. Nick gets a laugh at Lester, who has Rex’s poo running down his back; Nick sums it up with the line of “So perfect!”

Connor and Stephen continue to track Fluffy, who has VERY big feet and back at the Home Office Lester allows Nick to go through the Anomaly – aka the floating flashy thingy. Back in the forest, Stephen and Connor have identified that Fluffy is bad news.

Meanwhile, Ben, at school in detention, receives a shock; Fluffy’s followed him to the school and is TRYING TO EAT HIM! Naturally, his teacher doesn’t believe him. She opens the door and comes face to face with Fluffy, who attempts to eat them; it’s only through the efforts of Stephen, who throws a chair (of all things!) at her, that distracts her… but now, Stephen’s the starter. He runs away and blocks the corridor, but Fluffy just squashes it all and follows him. He fights her off with a fire extinguisher and she knocks him unconscious before escaping… by smashing open the doors.

Nick is being checked for his Anomaly exploration. Unfortunately, Captain Tom Ryan hs to come along too. They both travel through the Anomaly and Connor discovers that the Anomaly is closing. Nick releases Rex into the Cretaceous Era, and he flies off, while Nick goes wandering, calling for his wife. He comes across some more Rexs’ and a Bunch of Brians, or B.O.Bs, but does not find her.

Ryan calls him over; he’s found a camp… and it’s recent; there’s a dead body too, and a camera with the initials H.C on it; Nick immediately realises that the camera belonged to his wife, but the body is a male.

When Ryan tells him it is time to leave, Nick shrugs him off and goes to search for Helen, so, in order to make him cooperate, Ryan enters typical military mode and punches Nick, knocking him out cold. He carries him back to the Anomaly and the two have a brief spat; the Anomaly begins to close, and Cutter remains vigilant in his search for his wife. The two sprint back to the Anomaly and leap through it, but they’re not alone. Only Abby has noticed, but Rex has sneaked back through as well, so, when the Anomaly closes, she keeps him.

Fluffy makes herself known, terrifying everyone in the process. Claudia, in heels, trips and as Nick goes to rescue her, Stephen drives a car into Fluffy, knocking her to the floor, but she’s not dead; she roars angrily at him and he guns her down. Poor Fluffy.

Back in the Home Office, the photos on Helen’s Camera show pictures of her and Lester offers his condolences; Nick doesn’t care and reveals that more Anomalies could open and may have opened before and that nothing is over yet. The team leave.

That night, back at the University well after closing time, Nick is sat in his office, thinking. He picks up a picture of Helen and puts it face down. He heads to the kitchen and a shadow moves across the statue of the Smilodon in his office. Someone’s inside. Nick sees the shadow and returns with a cup of tea, but no-one’s there. The camera – along with the face down picture of Helen – however, is gone and an Ammonite, Helen’s calling card, is in their place.

The Ammonite is alive; it shortly dies and the door in the hall slams. Nick puts the tea down and runs after the person. 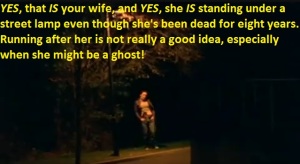 There she is; Helen Cutter is stood underneath the street lamp; Nick runs after her, but she is gone before he can catch her. Worried and relieved that Helen is alive, Nick stands by the railings of the University, attempting to take in everything.

This episode, for the first episode, gets the series of too a flying start; I’d rate it 5 out of 5; lets hope the rest of the series lives up to the hype of this episode (Having already watched the Series, I can safely say that it does). Let’s also hope Fluffy shows up again.

My personal opinion of this episode is that it is the beginning of the most awesome television series ever. All of the characters are awesome – even if Connor’s geekiness does make us cringe a little and even if Nick’s acting is a little wooden – but fortunately, having seen the Series, I can say it does improve as the Series goes on. The Next Time trailer shows that the series will continue with all the hype of the first episode.

I shall be back soon with more Primeval Reviews.

Until Next Time! I’m the Reviewest! See you all soon!